paper, paint, a gelliplate... and a colorful wedding !

Almost a year ago I was invited by a friend and ex-collegue to have a dinner with some other ex-collegues. Just a nice, chatty get-together..

But my friend brought her computer and without saying anything she showed us a hidden board on her Pinterest..

Everyone started yelling, laughing,... She was going to get married !!!

My friend has been a single mom for about 8 years and there was only one "emptiness" in her life: someone who loved her and her son ànd whom she could give àll her love.

Some time before, she met someone online and they seemed to be a match. After a year she decided to leave her job at our school where she teached for more then 15 years... and moved to his house, miles from where she used to live and work.

Her friend has two young children and you can imagine that this new family needed time to form a new family. But especially when I saw the little girl and my friend together, you could see they were to hands on one belly.

The girl lovely named my friend her "plus-mama" and I think that's such a sweet word instead of "stepmother"..

And what my friend never thought would ever happen in her life was getting real: a big family with three kids ànd someone who loves her and wanted to marry her.

We were so happy for her !

They both wanted a "do-it-yourself" wedding in their garden, so when I suggested I wanted to make her bridalbouquet with paper flowers, she agreed happily.

She shared with me the colors of her wedding: lime green, hot orange and teal blue.

So if that were not colors right up my alley !! ;)

I monoprinted several papers with my gelliplate.

Because I wanted some "movement" in the colors and that they were not "flat colored", I added several hues of the colors on the gelliplate. I didn't use any stencils cause that didn't show up after the flowers were made.

The colorful papers were cut with the die of Tim Holtz tattered pinecone.

I love the sight of the stacked cut flowers ! Yummy colors and a great choice of my friend !

Then I started making the flowers....

It took me some days to make the more than hundred flowers.

It costed me blood (not really..), sweat, tears (burned fingers from the hot glue...), time... but a lot of love was poured in while making these :) Happy thoughts were constantly with the new couple ! 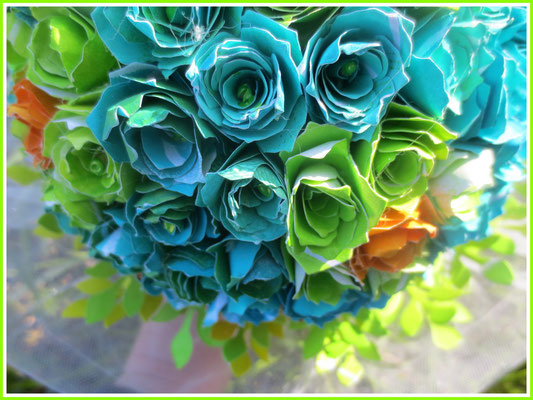 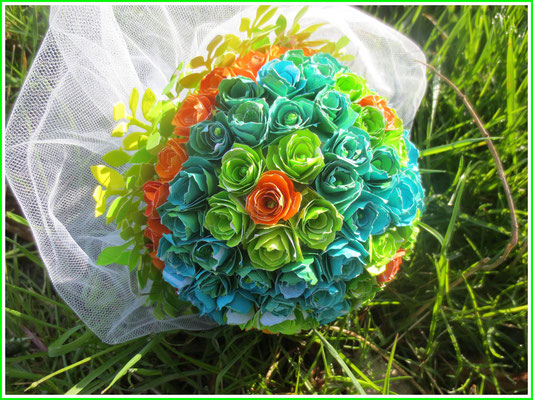 The flowers were glued on toothpickes and then put in a styrofoamball with a dot of glue under the flower.

I used the oranges in the middle with some green flowers around and then the blues were used to fill in all the gaps.

An orange flowerborder underneath, some diecut green leaves and tule on the bottom.

But when the bride holds the bouquet you can't see the stick.

My friend was very happy with this one-of-a-kind bridesbouquet and I was happy she allowed me to make this for hér very special day.

But I made her another handmade gift... but more on that in another blogpost !